I am diehard Jason Bourne fan. I have read most of the books and watched each movie few times. Yet I am always on a lookout for ass-kicking untraditional-detective characters. I watched Jack Reacher movies; I didn’t love them. These days, I am reading Jack Reacher books and I like him.

In all my reading and watching, I don’t recall ever meeting an ass-kicking female character. Yes, I watched Jessica Jones on Netflix. But she has supernatural abilities. I am keen on characters that are one hundred percent human and are exceptional at fighting. Don’t confuse the ass-kicking with the exploding cars, steroid induced muscles, and raging bullets of machine guns.

Usually, all cold war spy movies have male spies in gray trench coats plotting in windowless rooms and hovering in street shadows. Female characters are used to assist, soften, and give emotional dimension to the male leads. This is the first movie with a cold-war era spy who is a female.

When I saw the trailer of Charlize Theron kicking and jabbing and punching bearded shabby men in a narrow staircase, I was immediately hooked. I was enthralled with the look of Theron’s character—tall and lean dressed in black with contrasting blonde. Very stylized. Instead of suspenders, this spy wears a garter belt. 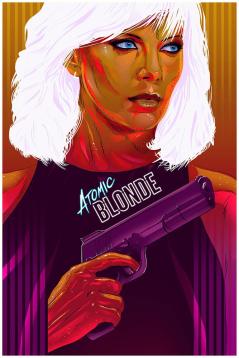 I like watching movies, but I am too lazy to stand in a line to watch the first-day first-show. I did watch the first-day last-show of Jason Bourne. My delayed action has often saved me from awful movies. Even though I knew of not-the-best rating of Atomic Blonde, I watched the movie with expectations. I craved for more than the much-hyped staircase fight scene.

The plot is not complicated. Spoiler. Agent Lorraine Broughton (Theron) is the go-to M16 spy. Ten days before the fall of Berlin wall, an M16 spy, also her ex-friend/lover, is killed by East Germans. He had a list that contains the names of British assets.

Her mission is to find the list and the double agent with the help of her contact–the West Berlin station chief David Percival (James McAvoy). From here on, there is action, female-female sex scenes, female-male sexual tension, double cross, insubordination, the death of innocent people, and ass-kicking. It has snippets of something from every movie/book I have watched/read.

There are sectors of action, as the overall pace strolls. There are three kind-of memorable action sequences. The beginning hand-to-hand combat in the car, where Lorrain’s only weapon is her red stiletto. Another where she searches the dead M16 spy’s apartment and fights the Stasi with a yellow rubber hose. Of course, the best executed is the staircase fight scene.

Super spoiler. Of course, in the end, Lorraine has the list and manipulates everyone else to believe that Percival was a double agent. She changes her hair color and kills her co-conspirator. Big reveal: Lorraine is the double agent. No, it doesn’t end there. She meets the CIA guy. We find that she is a CIA agent masquerading as an M16 agent. Bang. Take this Jason Bourne and James Bond.

Memorable lines: Nothing. Nada. Zilch. (You get the idea.)

Script: huh. I think they didn’t write the script. They gave only the graphic novel The Coldest City to the actors.

Dialogues: Lazy. Kurzfeld, the M16 boss reprimands Lorraine, “You’ve got MI-6 so worried they called in the CIA to talk to you.” I already know she is the ‘super-spy’ who by definition will be uncontrollable. Have you met any exceptional spy who follows orders?

Character: Of course it is a comic character. After all, she wears the most impractical clothes and has pebbles for brains.

Action: Interesting . . . Has its moments. But it is nothing new. It is a cheap knock-off of every-other action sequence.

Story/ plot: leaks like a five-inch sieve. I yawned, thought of heading of this blog, and predicted almost everything but the unnecessary twist at the very end.

Acting: I am not impressed. There is no vulnerability to Theron’s character. She is one tone–blonde. See what I did here!

Soundtrack: The best. If you start with David Bowie, then you can never go wrong.

My pet peeve: When characters come and go because the story needs a device to add information, help the main character, or invent a reason to move the story forward. This movie is the cliché of paper-thin side characters.

Page from the graphic novel The Coldest City

I don’t regret watching the movie. I wished I waited for the DVD. Probably now Hollywood might produce movies with woman leads as a spy. That is wishful thinking. Hollywood will develop movies that have woman action characters.

In Atomic Blonde, I enjoyed only tapping my feet to the soundtrack. Did the director David Leitch pick-up the trick of essence-ing the cold-war era with ‘90s rock music from the “The Americans?”