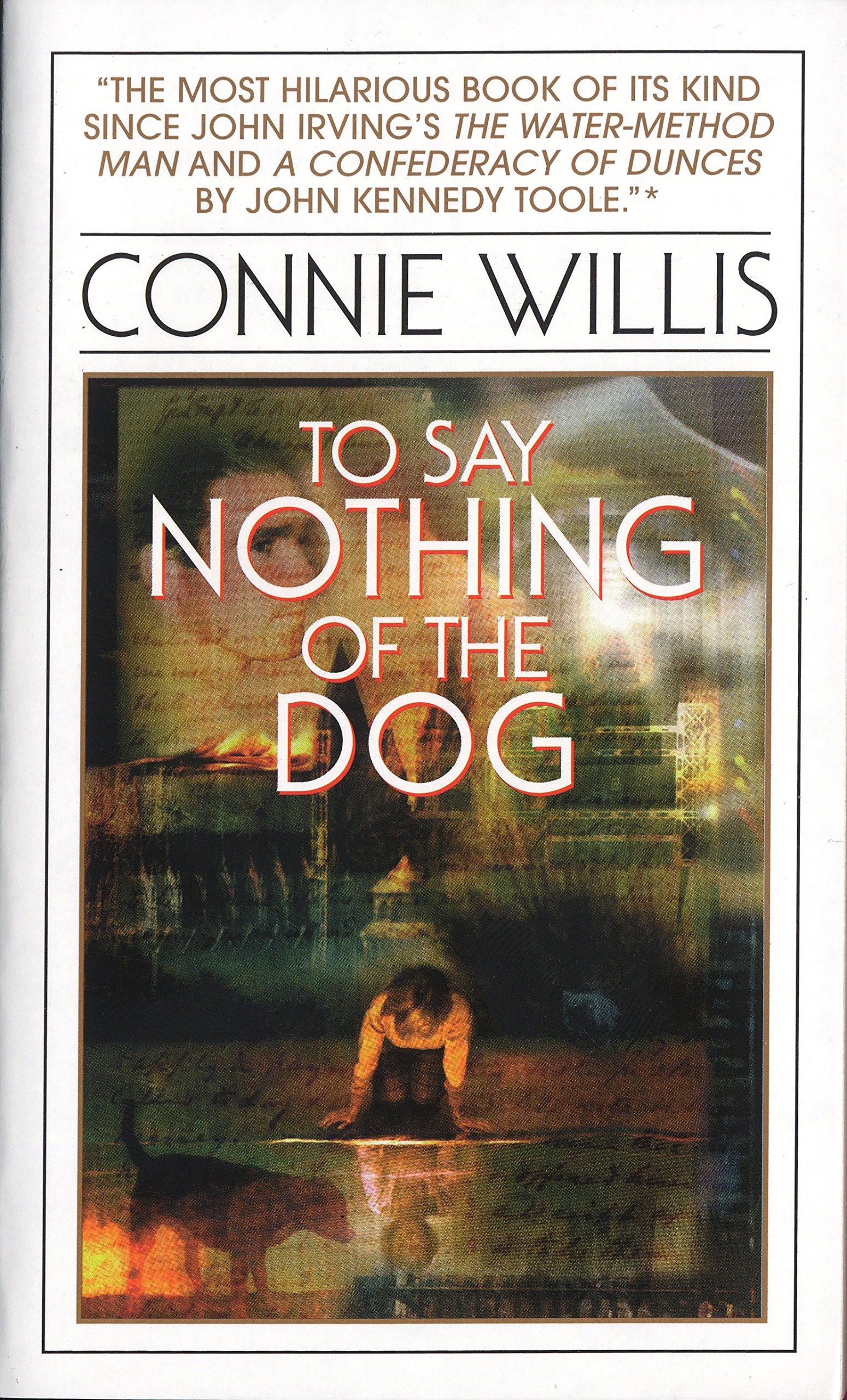 There isn’t an assassination attempt in To Say Nothing of The Dog, if we don’t count a cat being saved from first degree drowning by a mindful time traveler enthralled by the creature, extinct in her own time. Still, the book has all the suspense of a mystery novel and plenty of fun mystery fiction references. Instead of figuring out who murdered a preferably not too lovable victim, Connie Willis’s main narrative concerns itself with the whereabouts of a hideous, lost Victorian object. To Say Nothing of The Dog is a science and mystery fiction mashup with plenty of historical flair.

Ned Henry is a time-traveler historian from Oxford leading a scavenger hunt in 1940. Having failed to locate the bishop’s bird stump—which, according to the overbearing Lady Schrapnell is an essential object to the completion of Coventry Cathedral’s reconstruction project—he returns to 2057 to recover from advanced time-lag. Seeing his disheveled state, and hearing his flowery, melodramatic speech—typical time-lag symptoms, Professor Dunworthy sends him to 1888 to recover far from Lady Schrapnell’s wrath and complete an easy mission. He must return a cat which the well-meaning Verity Kindle somehow brought back to 2057 from the Victorian era, something that threatens to cause an incongruity and disrupt the whole space time continuum, as a significant object was never brought back from the past before, much less a living creature.

It should have been easy, but time-lag makes it hard to distinguish sounds. What was the name of the place he had to take the cat to? Wasn’t he supposed to meet someone? Names and places mixed and mashed together in disarray, his mind was worse than the displays of knick-knacks in the jumble sales he scouted in the forties looking for that absurd bishop’s bird stump for Lady Schrapnell.

The story is told by Ned in first POV. He’s a nice guy trying his best to make things right despite being way out of his depth; the Victorian era wasn’t his field of study and the time-lag doesn’t help. In his confusion, he arrives at the wrong place in the wrong time and causes all sorts of changes in the past that might disrupt life as we know it.

With nothing less than the integrity of space-time continuum at stake, he must locate Coventry Cathedral’s bird stump, prevent a historically inaccurate marriage, and try to avoid getting engaged to a Victorian maiden himself.

In the same way that a writer instill a sci fi novel with world-building setting and custom details, the past is explored in rich setting descriptions by Ned as he navigates living rooms over cluttered by Victorian style décor and is constantly on the edge of being caught for his improper manners.

Willis is a self-proclaimed anglophile and starting by the title, I lost count of all the great British literary references in the book, many of them regarding masters from the Golden Age of mystery fiction. Besides plenty of Agatha Christie’s famous detective, Hercule Poirot, Dorothy Sayers’s Lord Peter Wimsey has numerous notable appearances. I counted fifty-seven mystery fiction mentions in To Say Nothing of The Dog. There are probably some I missed for being too distracted by the story; which is a great thing.

As a fan of both mystery and sci fi woks, I loved this book that read like a manifest of appreciation for the mystery masters with a fun, futuristic twist. For the cozy mystery lover, there’s even a touch of romance a la Harriet Vane and Lord Peter mode. I believe this is also a special treat for fans of historical novels and comedy of manners filled with twists and turns.

In the excerpt below, Ned tries to understand what Verity Kindle brought back from the past, and how he can possibly fix it.

“I you were going to do something so completely irresponsible,” Mr. Dunworthy said, “why couldn’t you have waited till after the consecration?”

I leaned back against the wall and closed my eyes. It was rather pleasant listening to someone else being read out for a change, and by someone besides Lady Schrapnell, even though it was unclear what exactly the calamity was guilty of. Particularly when Mr. Dunworthy yelled, “That is no excuse. Why didn’t you simply pull the cab out of the water and leave it on the bank? Why did you have to carry it into the net with you?”

Cab-toting seemed even less likely than rat-pinching, and neither one seemed in need of rescue from a watery grave. Rats especially. They were always swimming away from sinking ships, weren’t they? And had they had taxis in the Nineteenth Century? Horse-drawn hansom cabs, but they were too heavy to carry even if they would fit into the net.

In books and vids, those being eavesdropped upon always thoughtfully explain what they are talking about for the edification of the eavesdropper. The eavesdroppee says, “Of course, as you all know, the cab to which I refer is Sherlock Holmes’s hansom cab which had been accidentally driven off a bridge during a heavy fog while following the Hound of the Baskerville, and which I found it necessary to steal for the following reasons,” at which point said theft is fully explained to the person crouched behind the door. Sometimes a floor plan or map is thoughtfully provided next to the frontspiece.

No such consideration is given the croucher in real life. Instead of outlining the situation, the calamity said, “Because bane came back to make sure,” which only confused the issue further.

“Heartless monster,” she said, and it was unclear whether she was referring to the bane that had come back or to Mr. Dunworthy. “And it would only have gone back to the house, and he’d have tried it again. I didn’t want him to see me because he’d know I wasn’t a contemp and there wasn’t any place to hide but the net. He’d have seen me in the gazebo. I didn’t think—”

“I don’t intend to do anything until I have considered all the possibilities,” Mr. Dunworthy said.

“I am extremely fond of cabbies,” he said, “but there is a good deal at stake here. I must consider all the consequences and possibilities before acting. I realize that’s an alien notion to you.”

Cabbies? I wondered why he was so fond of them. I have always found them entirely too talkative, especially the ones during the Blitz, who apparently paid no attention to the admonition that “Loose lips sink ships.” They were always telling me how someone had been buried alive in the rubble or got blown up—“Head was all the way across the street in a shop window. Miliner’s. Riding in a taxi just like you are now.”

“Are you sending me back?” she said. “I told them I was going out sketching. If I don’t come back, they’ll think I’ve drowned.”

“I don’t know. Until I decide, I want you in your rooms.”

There was a sinister sounding silence, and then the door opened, and there stood the most beautiful creature I’d ever seen.

Finch had said Nineteenth Century, and I expected hoop skirts, but she had on a long, greenish gown that clung to her slim body as if it were wet. Her auburn hair trailed about her shoulders and down her back like water weeds, and the whole effect was that of a Waterhouse nymph, rising like a wraith out of the dark water.

I stood up, gawping as foolishly as the new recruit, and took off my ARP helmet, wishing I had cleaned up when the nurse told me to.

She took hold of her long, trailing sleeve and wrung it out on the carpet. Finch grabbed a fax-mag and spread it under her.